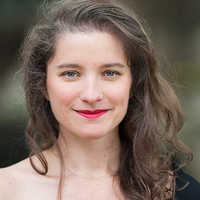 Harpsichordist, vocal coach and conductor, passionate about voice and chamber music, Camille Delaforge founded the ensemble Il Caravaggio with mezzo soprano Anna Reinhold, with whom she recently performed at the Sablé-sur-Sarthe festival, the Oude Musiek festival in Utrecht, the Embaroquement Immédiat festival, the Sinfonia festival in Périgord, the Agapé festival (Geneva and Reims), and on tour in South Korea; the ensemble will also have the pleasure of starting an artistic residency at the Sablé-sur-Sarthe festival, with the support of the Centre de Musique Baroque de Versailles.

She has been Vincent Dumestre's artistic assistant to the Poème Harmonique since last season, and was assistant conductor of this same ensemble on two lyrical productions during the 2019/2020 season: Sebastián Durón's Coronis at the Opéra de Caen and Lully's Cadmus et Hermione at the Opéra Royal de Versailles.

She has also been invited to work with numerous orchestras, including the Orchestre Philharmonique de Strasbourg and the Orchestre de Cannes, when they play the Baroque repertoire.

Camille Delaforge regularly works as a conductor and continuo player with various ensembles such as Les Ambassadeurs, Le Concert de la Loge, the Ensemble Correspondances, Orfeo 55, with which she performs, among others stages, at the Chapelle Royale de Versailles, at the Théâtre des Champs Elysées, at the Zariadye Hall in Moscow, the Philipszaal in The Hague, the Wigmore Hall in London, the Salzburger Festspiele, the Victoria Hall in Geneva, with programs such as Couperin's Les leçons de Ténèbres as well as "Heroes from the shadows", "Prima donna" and "Quella fiamma", recorded by Erato and Warner Music; as a conductor, she participated in the production of Grétry's Raoul de Barbe-Bleue, at the Centre de Musique Baroque de Versailles.

Several recordings will be released this season 2020/2021, including two for the Versailles Spectacles label: Lully's Cadmus et Hermione with the Poème Harmonique (as assistant conductor and continuo player) then Miroirs, with his Ensemble Il Caravaggio, around Dandrieu's trio sonatas.

Concerned about developing socio-cultural exchanges through music teaching, she organises humanitarian projects. In this context she taught the most underprivileged children in Ecuador during the summer of 2015. This resulted in a partnership between the Conservatoire National Supérieur de Musique et de Danse de Paris and the University of Guayaquil (Ecuador).

A graduate of the Conservatoire National Supérieur de Musique et de Danse de Paris, she studied harpsichord and basso continuo with Blandine Verlet, before joining the class of Olivier Baumont and Blandine Rannou at the CNSMDP. Camille Delaforge also holds a Teaching Degree for harpsichord.

Download Camille Delaforge biography
Before using this biography, thank you to ask for its last update, by email.