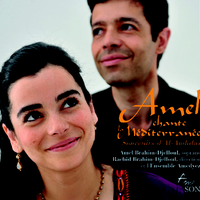 Amel Brahim-Djelloul is one of the most talented musicians of her generation. Since her debut in 2002, she has been performing on the most prestigious stages in France as well as internationally (Opéra de Paris, Staatsoper de Berlin, La Monnaie de Bruxelles, Madrid, Concertgebouw d'Amsterdam, Festival d'Aix-en-Provence, Barbican Center de Londres, Grand Théâtre de Genève, Washington, Lincoln Center de New-York…).

As an artist she also wants to succeed in the double challenge of getting closer to her Algerian and Mediterranean origins and winning a wider audience which inspired her to create a performance of mediterranean music from Andalousia in a close cooperation with her brother, the violinist and musicologist Rachid Brahim-Djelloul.

After the artistical domination of the region of Andalousia between the 8th and 12th century, the Arab-Muslims and the Jewish people of Andalousia were hunted from the the early 12th century by Christians. Some of them exiled to the Maghreb and another to the countries of the Levant (Turkey and Greece).

The idea of this show is to connect the various styles of music that have resulted from these influences: arabic-andalous, jewish-spanish, turkish, greek, kabyle...

The concert has been created in november 2007 in residence at Espalion (South West of France). It was given for the first time in Paris on November 26, 2007 at the Téâtre des Boufes du Nord. The first performances are sold out and are a huge success. With this enthousiastic support a CD was recorded in 2008 with AmeSon label. Furthermore the concert was given in many venues : Festival Viva Voce de Caen, at the Cité de la Musique in Paris, at Château de Maintenon, at the Auditorium de Vaucluse, at Marciac Festival and at the Festival d'Art Lyrique d'Aix-en-Provence as well as at the Scène Nationale d'Orléans this year.